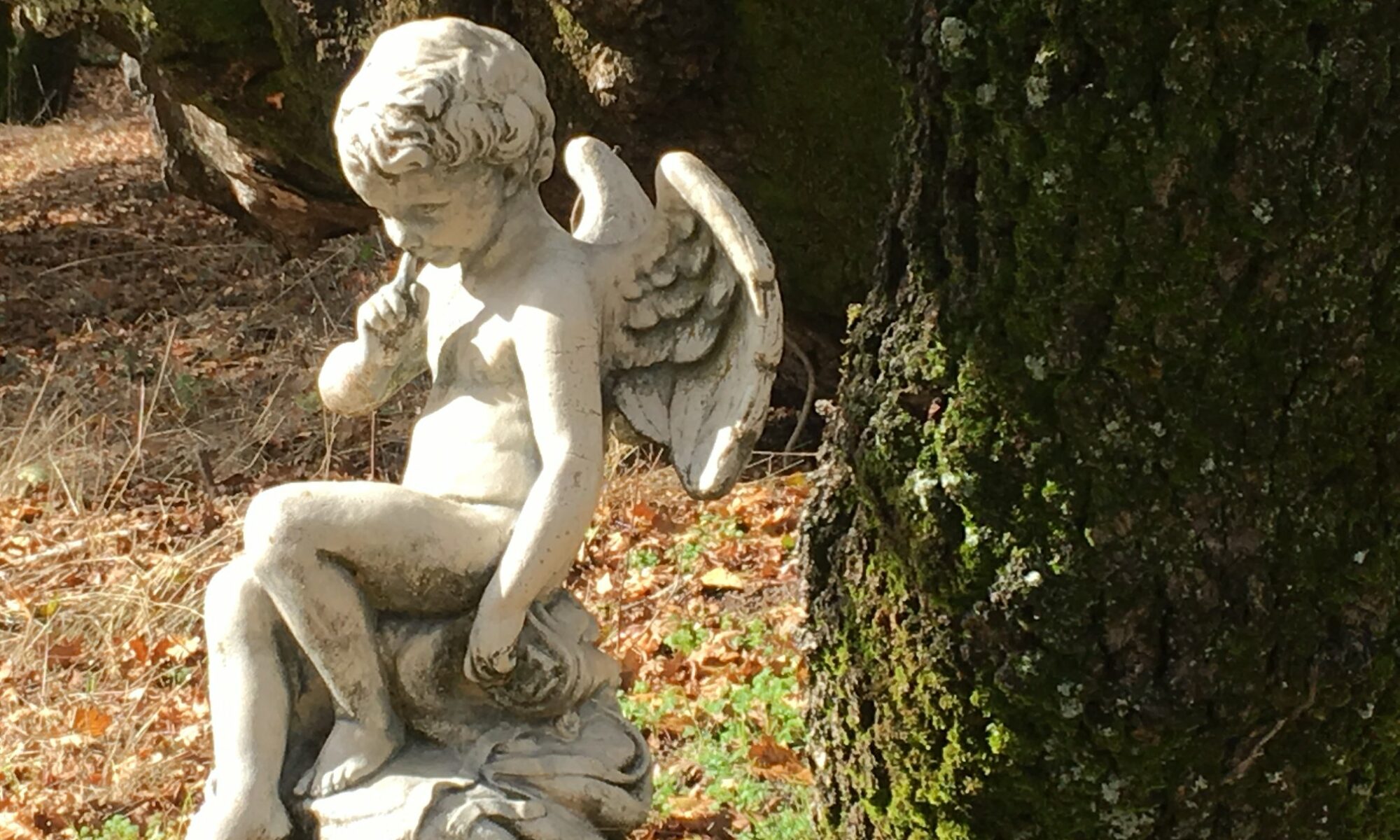 Unless you read the signs, you might not know it’s there. The Eldridge Cemetery, stretching from Orchard Road down to the broom-choked banks of Mill Creek on the former Sonoma Developmental Center campus, resembles parkland more than a burial ground. Its wrought-iron gates appear to open onto nothing more than a gentle, grassy slope, scattered heritage oaks dripping lace lichens, and stunning vistas of Sonoma Mountain’s summit ridge. A plaque affixed to one of the gate’s stonework pillars and a free-standing rusty metal sign name the place.

“We remember you” reads the inscription.

A little guardian angel watches over the grounds, head gently bowed, wings gently folded. She sits in the shade of some old oaks just uphill from the gate. One of the trees has listed, its limbs resting in the embrace of a sister oak that offers steady support, for now. It’s hard to know how long the embrace will last, given how precarious it appears, and the angel looks like she’ll be crushed if the tree falls. But walk down to the sunken vault where the cremains are interred, and you’ll see she’s perched between where the twin trunks will land. It’ll be a narrow miss.

The angel knows what the earth holds here. So does history. Thousands of people who lived in Eldridge—in the institution that started in 1891 as a home for “feeble-minded” children and ended in 2018 as the SDC—are buried here. An astonishing map details where they were laid to rest, tightly packed in long rows stretching from roadside to creekbank. Numbered concrete blocks mark each end of these rows, and a low stone wall forms a boundary along the road, both remnants of the cemetery’s historical hardscape. A photo from 1941 shows headstones at some of the gravesites, but these have long since disappeared, as have the flowers and keepsakes left by the living for the beloved departed.

To those not in the know, the Eldridge Cemetery may appear stuck in the same quiet, increasingly ramshackle limbo as the neighboring campus. But it’s not. Instead, the cemetery is a place where Eldridge’s story pivots toward something hopeful, not just for the burial grounds, but also for the campus and surrounding open spaces.

The transformation of Eldridge—envisioning how 900-plus coveted acres can be used now that the developmental center is gone—is taking place on many fronts. Folks are working to ensure its open spaces are conserved, on a specific plan to guide campus redevelopment, on a historic district, on proposals for housing and trails and more. Work on the cemetery memorial project has mostly flown under the radar, but achieved a remarkable milestone in recent weeks. The state of California, the proverbial wheel to which all shoulders must be applied before anything can happen on the property, has bestowed its blessing on plans to erect a memorial at the site. Funding is earmarked. Surveyors have been contracted. Work is slated to begin this month.

Even as pandemic and bureaucracy slows progress on so many plans for Eldridge, this one moves ahead.

The memorial project has been many months in the making, with months of work to go. Community members dedicated to the work include Kathleen Miller, whose son was an SDC resident; Christian Pease, the photographer behind the Eldridge Portrait Project; Kathy Speas, the SDC’s former chaplain; the Glen Ellen Historical Society’s Angela Nardo-Morgan; and many others. They’ve worked tirelessly with champions at the state level, including John Doyle, the now-retired chief deputy director of California’s Department of Developmental Services (DDS); his successor, Carla Castaneda; and Gerald McLaughlin of the Department of General Services (DGS). On the ground at Eldridge, Charlotte Jones, SDC facilities manager (also retired); Valerie Dunn, who took Charlotte’s place; and public information officer JJ Fernandez, have also been integral to the effort. Many months of meetings, site visits, e-mails, phone calls, more e-mails, more site visits, more meetings—and the wheel turned.

The cemetery group has collaboratively developed a conceptual design for the memorial that both preserves the cemetery’s viewscapes and honors all of Eldridge’s dead by name. It turns out administrators of the institution, in all its incarnations, kept records of those interred on the grounds, as well as those buried off-campus, some in Sonoma’s Mountain Cemetery, some in a cemetery in Sebastopol. A map of the rows and graves, and a brief history of the home and hospital, are also part of the plan.

Across Orchard Road from the cemetery proper, survey work will define an area to ensure ADA-compliant accessibility for visitors, and outline a site where informal memorial markers and artifacts can be displayed. These small monuments—more than fifty placed by families, friends, and staff over the decades—have been carefully gathered from the campus and cataloged as part of the project.

Once survey work is complete and design details have been fine-tuned, the project will be formally presented to the community. The group knows well how crucial that step is. Proposed improvements may cost more than the state has pledged, and the grounds will require upkeep once the state steps away. Dollars and sweat equity are something local residents can help provide.

I love to walk in graveyards, and always have. Cemeteries are peaceful and grounding in my experience; I’ve always felt the dead welcome visits from the living. The first time I realized Eldridge had a cemetery was probably twenty years ago, when I spotted the guardian angel. I went right down to sit with her a spell.

As time went on and I became a chronic walker of Orchard Road, I would sometimes break away from the pavement to ramble in the grass, communing as best I knew how with the people resting there. One year, as the season bent toward late summer, I noticed cracks in the slope’s adobe soils, miniature crevasses splintering the earth glacier. I stepped over them quickly, afraid to peer in, afraid I’d spy bones or the splintering wood of a decades-old casket. Quick prayers, a light step, asking for forgiveness if my passage was disrespectful.

Now that I know how dense the burials are, when I come to visit I keep to the edges. I also hold with care the idea that the graves may be sliding—or have already slid—down toward the creek. Sliding graves are an odd thing to consider, but as disrespectful as walking on graves feels to me, it feels right to imagine that, as they subside, the dead have started to share embraces, like the oaks arcing over the guardian angel. Arm in arm, sharing eternity for as long as it lasts in this beautiful place.

How nice it will be to know their names.