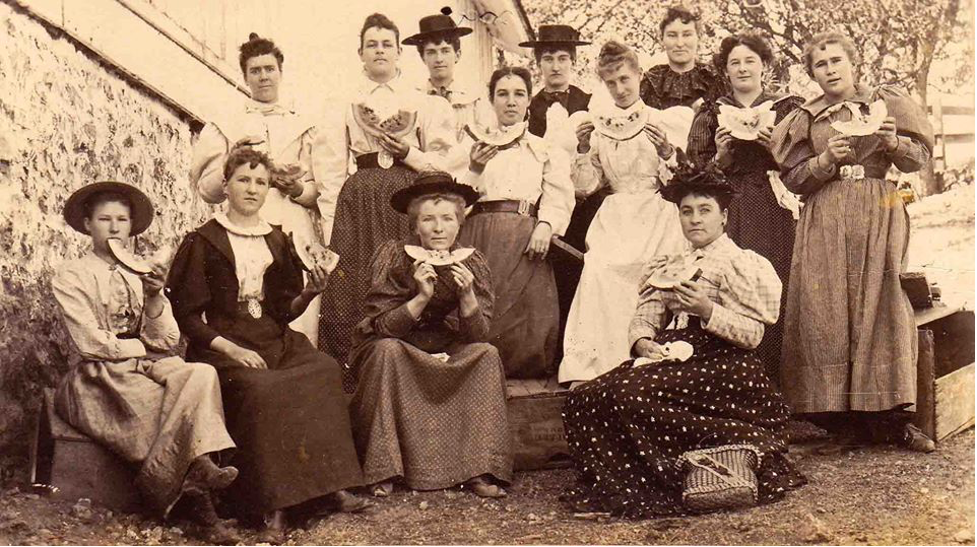 I’ve enclosed a picture of our Glen Ellen Women’s Improvement Association so you can put faces on some of the people I mention in my letters to you. You will recognize me second from right and standing, in that horrid herringbone dress with my hair (as usual) beginning to come undone. And, of course, holding the biggest piece of watermelon amongst the group. As dear Samuel’s father observed, I’ve always been a good feeder. Now that Samuel’s gone, I’m even more inclined to indulge and, as you know, I am passionate about my melon. It was all I could do to not challenge the others to a seed-spitting contest, or to wipe my chin with my herringbone sleeve.

Flora is the flirt standing next to me. Her hair looks blonde in the photograph, but it has strawberry highlights, which match the redheadedness of her nature. Look at that waistline! No hint of a babe, though hers is not yet a year old—I think she uses a winch to tighten her corset. And the tilt of her chin! I’ve told you about her divorce, which was the scandal of Glen Ellen last winter. Poor Flora still invites scandal because, despite her declarations that she is not interested in a suitor—and I believe her!—she cocks her head and smiles her smile and the eyes of men swim with desire.

There’s also the sad fact that some of the ladies in town, those who don’t know Flora well, perpetuate that scandal. Look over her shoulder, and you see Mrs. Birchbinder. You can’t miss the pucker of her lips, which is not because her bowtie is too tight. She is the wife of poor brow-beaten Mr. Amos Birchbinder, who works in Santa Rosa as a bookkeeper. He probably can’t wait to hop onto the train each morning, simply to escape Mrs. Birchbinder’s perpetual, scowling disapproval. There’s not a proposal that comes before our improvement committee that she doesn’t dissect; I cannot imagine living in a house under that same dour scrutiny. Is that wicked of me?

Mrs. Birchbinder is also not terribly fond of Lola Walker, who is the Amazon standing behind me. Lola is my neighbor, and you’ll not believe this but . . . she’s a former performer in the circus! I kid you not! She is from the Ukraine, and her English is horrific, so I have been unable to learn much about her other than what her husband, Mr. Walker, has shared. This is what I know: Miss Lola used to ride horses under the Big Top back in her home country, and then in New York after emigrating. That’s where Mr. Walker met and married her. Mr. Walker, I might add, is quite the peacock when he is on Lola’s arm, despite being a full head shorter than she. I believe Lola is bored now, here in sleepy Glen Ellen, and has joined the women’s club to enliven days that must seem stultifying compared to circus life.

The lady to my right is Mrs. Paganini, whose husband owns and operates a vineyard just north of the Dunbar School, where I work. I also don’t know much about her—she, like Lola Walker, is an immigrant, and her English isn’t good. But she’s a prodigious breeder. There are twelve Paganini siblings, who range in age from five—little Maude, who is deaf—to Guiseppe, who is seventeen and hardly ever attends school. It’s no wonder the missus hasn’t had time to learn to speak her new home language. That she made this club meeting is something of a wonder. What’s not a wonder is that she can almost out-eat me when it comes to watermelon!

I’m going to skip now to the other side of the photo, where no doubt your eye has been drawn even as I’ve written about the others. Oh, the piercing eyes in that girlish face! And that excellent posture! Miss Ruby Stuart is the daughter of Glen Ellen’s founders, Charles and Ellen Stuart, who live in a stately home on Glen Oaks Ranch, at the foot of the forbidding Mayacamas Mountains. You can probably see from her look, Sophie, that Miss Ruby is a firebrand. She’s only able to speak truth, like it or not, and I adore her. She’s come up though the Dunbar School, and she was a voracious reader, even as she was a tomboy of the first degree. She can probably outride Mrs. Walker, and could probably outbreed Mrs. Paganini, though I suspect she’d put a stop to that before there were twelve offspring in her brood.

Now that I consider the photo, I find the other three seated in the front row quite the juxtaposition. Next to Miss Ruby sits Coraline Hill, who is the new wife of Senator William Hill, one of the wealthiest landowners here in our little town. Senator Hill’s first wife, Agnes, died in childbirth along with her babe not two years’ past, and the good senator was quick to engage Coraline. She’s a newcomer to the women’s club, and she’s a mystery to me. Look at how she sits, even as she sports the fanciest duds of us all—like a man. Now, that is truly wicked of me.

Next to Mrs. Hill sits Ellen Chauvet, wife of one of Glen Ellen’s founding fathers. I’m sure you’ve heard me speak of Joshua Chauvet, who built his fortune as a baker in the gold country, then brought his formidable skills and wealth West, here to Glen Ellen. She doesn’t often attend improvement club meetings, keeping mostly to her home, a fine Victorian across the street from her husband’s Chauvet winery. Rumor is that she tends to tipple, but I’ve not seen her in her cups myself. Does saying the thing, having not seen firsthand, make me more wicked?

The lady in the wonderful polka-dot skirt is one of my fellow school teachers, Miss Jane Parker, who teaches up at the Enterprise School. She and Maudie Guthrie of the Trinity School, wearing white and standing behind Mrs. Hill, adore coming down to attend our meetings, or church, or whatever other social event they can here in town, as their schoolhouses are tiny and secluded. Both have a tendency to talk nonstop when they come into town, even though they have nothing very interesting to say. I imagine that’s because schoolchildren in general don’t care to divulge much of interest to adults, and the Trinity and Enterprise grade schoolers, being reared in the hills, have even less to say than most.

I have circled round the photo back to Mrs. Birchbinder and Flora, or rather to the two ladies standing next to them. As you might have guessed by the similar black brimmed hat, the lady beside Mrs. Birchbinder is her sister, Evelyn Carriger. See the near smile on her face? Evelyn has an entirely different disposition, tending toward the quiet side but also toward a sly humor, often at her sister’s expense. She’s an infrequent participant in the women’s club, as she still lives down valley in her parents’ fine home on the sprawling Carriger Ranch. Her beau, however, is Baxter Serres, whose farm borders the home for the feeble-minded on the south side of town, so she comes up as often as permitted, and always under the watchful, scowling eye of her black crow chaperone.

Señora Carmelita Rodriguez takes center stage in the photograph, and rightly so. She runs what remains of the Los Guilicos ranch just north and west of town, and along with Mrs. Eliza Hood and Mrs. Ellen Stuart, has become a winemaker of some renown. The culture of winemakers, as you might imagine, is dominated by the male sex, and even moreso by the great vintners of France and Italy. But these fine ladies have won awards for both their white wines and reds, as well as their ports and brandies. Mrs. Hood and Mrs. Stuart haven’t made time to join our improvement association, but Señora Carmelita (much to Mrs. Birchbinder’s consternation) plays a leading role, and given her connections to Mexican families throughout the northern Sonoma Valley, is able to identify what we, as a social club, can provide to aid those who are have wants and needs. She is related by blood to the famous (or infamous) General Mariano Vallejo, who established the township of Sonoma down valley, but she herself is only half-Mexican, and like Mary-Ellen Pleasant before her, can pass as a white woman if she chooses. She possesses beauty and intelligence, and I admire her for the fact that she chooses to wear her Mexican heritage proudly, even as the ranchero culture has faded away.

My dearest Sadie, I hope you haven’t found my descriptions of my compatriots too catty, and also that you find it helpful to be able to put faces to the names when I mention them in letters going forward. Perhaps, one day, you’ll be able to make the trip up to Glen Ellen and meet some of these fine ladies in person! I can only hope!