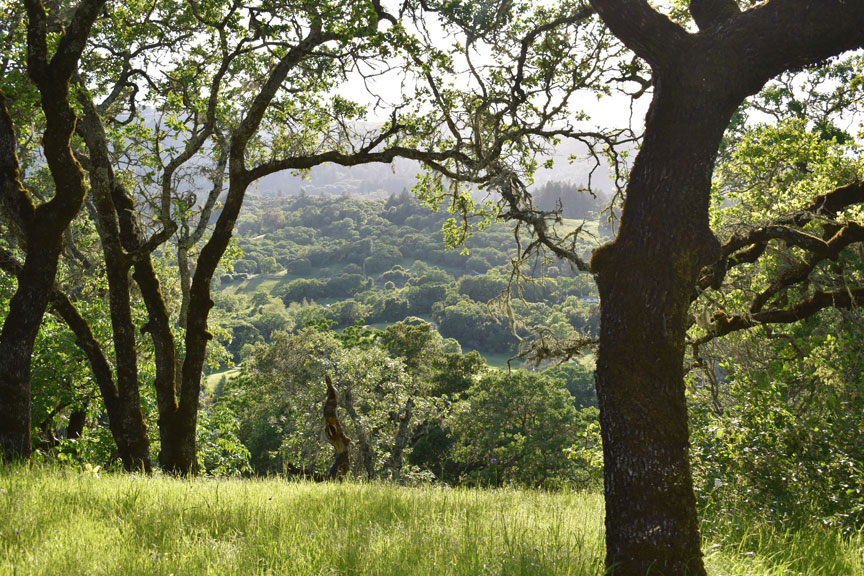 This was not my finest hour.

Last month, while hiking with my friend Nick, I slipped on a steep pitch of trail and folded my ankle over onto a rock. The impact fractured the base of my fibula, but I didn’t know that in the moment. All I knew was it hurt like hell and I needed to lie down.

Nick, following my lead, gave me space, then gave me a stick, then two sticks, then his arm. The thinking was if I could stand and hobble, maybe I could make it back to the trailhead without much fuss and the hike wouldn’t be a complete loss. We were five-and-a-half miles into what would have been a lovely seven-mile ramble through the backcountry of Jack London State Historic Park and the Sonoma Developmental Center, following trails we both know well. A snoop around Camp Via, a blossom hunt in the old orchard, a visit to the ancient redwood—the grandmother tree, too gnarly and difficult to be brought down, just like me.

The fall happened on the downhill run, as we were approaching Fern Lake. All adventurers  know if something’s gonna go wrong, it goes wrong on the descent. Blink. Slip, twist, down. And down for the count.

I knew I’d probably broken something. There was a telltale crunching noise in the disasterous mix. But I’m prone to rolling my ankles, so as I lay in the dirt trying to settle my stomach, I held out hope that’s all it was—a bad roll. After a few long moments I stood up, hoping to carry on.

No go. Two sticks and Nick’s strong arm notwithstanding, when I put weight on my right foot, pain ricocheted around unhelpfully. I got clammy and queasy and had to lie down again, while Nick paced the fire road, a self-described “brilliant humorist at the height of his powers,” saying helpful, apparently hilarious things I can’t remember.

Eventually I sat back up and began rifling through my daypack for my first aid kit, looking for a painkiller. I am a hiking guidebook writer, after all. I carry all kinds of nerdy equipment no matter the length of a chosen ramble. Emergency blanket, check. Water purifying tablets, check. Buck knife, check. First aid kit … crapola.

I did have a small flask of whiskey, however—a throwback to my circumambulation on the Tahoe Rim, when we would end long days on the trail with a bone-warming tipple. If a cowboy could medicate with whiskey before the doc dug the bullet out, a shot oughta get a hiker with a bum ankle down a trail, right?

I took a swig. I stood. A blast of pain, and my stomach revolted. I threw it up.

My predicament wasn’t an emergency, I insisted to Nick, after he propped me up against a log. We’d been discussing ego earlier on the hike, and mine took firm control of the decision-making process. I am a hiking guidebook writer, after all. I’m all about self-sufficiency in the woods. We needed to figure out how to get off the mountain without summoning the National Guard — and it turned out the National Guard was a distinct possibility, since a passing mountain biker told us a unit was training on SDC that day, along with the sheriff and the fire department. A helicopter flew overhead. I sank deeper into the log.

Fortunately we were close to home, we had cell phone coverage, and together Nick and I sorted our options. Plan A involved calling the non-emergency lines at the Eldridge Fire Department and SDC police department to see if we could get someone to open a couple of gates; that way one of my sons could drive up and retrieve me. Plan B involved calling friends who own land bordering the SDC; Steve knows the web of trails better than anyone, and has a four-wheeler that could get me out easily. Plan C involved crawling and crying.

Plan A was a wash: My son ended up leaving messages that weren’t returned until several hours later, when I was being treated in the emergency room. Calling 911 would have gotten us a quicker response, but … well, hiking guidebook writer …

Fortunately, Plan B was a success. Several “where are you again?” calls were necessary, because SDC’s trails aren’t marked and must be described using language better suited to wayfinding in the nineteenth century. After clarifying our location with reference to creeks and dams, Steve and my son navigated to my rescue.

Time of fall to time of arrival back in civilization was, all in all, about two hours. We got a little cold while we waited, but both Nick and I had layers. If we’d had to wait longer, even overnight, we had food and emergency shelter and ways to purify the water Nick could have retrieved from the nearby creek. There would have been crying and crawling, but we were equipped for survival. Hiking guidebook writer, after all.

I’ve done a lot of thinking about what happened on the mountain since the accident, if for no other reason than I can’t do much else. In researching Search and Rescue Alaska (where I wrote about survivors) and Death in Mount Rainier National Park (where everybody dies), a significant common denominator became crystal clear: The folks who survive bad breaks of all kinds in the wild are the ones who are prepared, and who follow bad luck with good choices. Nick and I didn’t compound a bad situation with bad decisions. We didn’t panic. We didn’t despair. We were prepared, mentally and physically, to cope. Our resilience was in the layers we carried ward off the cold, and in the good humor we shared as we waited.

I’m a solo hiker—I’ve walked most every trail in the guides I’ve written alone. I’ve had more than my fair share of uh-ohmoments; I’ve also had more than my fair share of good luck. In this instance, luck took the form of a clear-thinking companion. But I also carry luck with me, in my pack, on my back. Even without Nick, even without first aid kit, I would have been just fine.

What’s In My Pack

Camera, tablet, GPS unit (if working on a guidebook)

Poop bags for the dog

Poop bag for myself (TP + ziplock bags to pack it out)