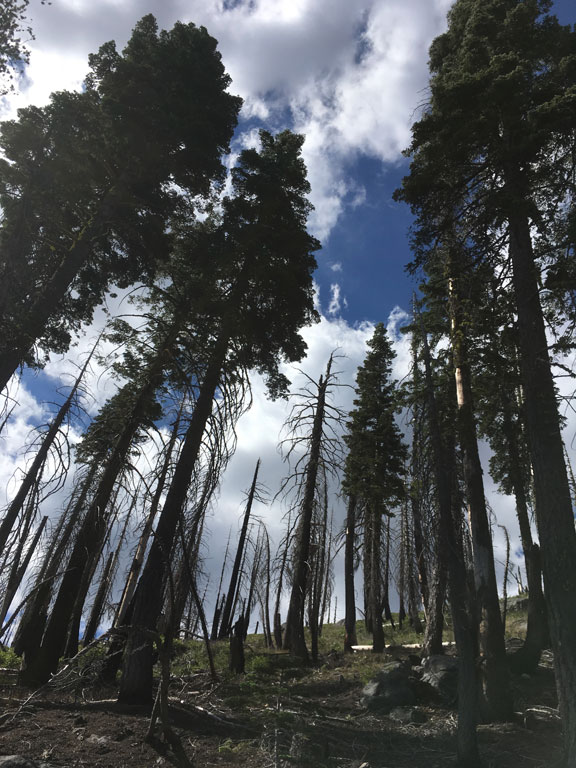 In July 2012 lightning ignited a wildfire in the woodlands on the northeast slopes of Reading Peak. The blaze was contained one month later, having scorched more than 28,000 acres, nearly 17,000 of them within the boundaries of Lassen Volcanic National Park.

In the wake of the fire, trails in the park’s northern backcountry, including the Cluster Lakes Loop and sections of the Nobles Emigrant Trail and the Pacific Crest Trail, were closed. Hazards included falling trees, blocked routes, and voids where the roots of trees incinerated underground. Knowing winter snows would help settle things down and start the rejuvenation process, park officials kept the fire zone closed until the summer of 2013.

I first ventured into the burn in August 2013, traveling north from Hat Lake on the Nobles Emigrant Trail. I knew the trail was wide enough and flat enough that I should be able to negotiate whatever the fire-scarred landscape presented. What I encountered was stunningly eerie.

The mosaic at the outset of the hike, with some trees scorched and others still green, is a relatively common sight in Lassen’s older fire scars—and in other areas of California’s mountains, where wildfires frequently erupt in summer and fall. Fire zones in various stages of recovery, some the result of controlled burns, can be seen on the trail to Chaos Lake, at Bathtub Lake, on the slopes of East Prospect Peak, around Snag Lake, and elsewhere.

But in the Reading burn, the scene was entirely new to my senses. I walked from a healthy woodland into a foreign landscape; two miles in, I found myself standing in a ghost forest. The floor was uniformly gray and powdery, thick with ash and sterile. There was no sign of wildflowers or grasses—harbingers of rejuvenation. I could hear the knock of a woodpecker, but otherwise nothing flew, not bird or bug. Hat Creek was a thin green ribbon lacing through the firescape. The standing trees were blackened matchsticks, and the wind set them to creaking. I found myself on high alert, waiting for the dead to come crashing down. Then the route disappeared, lost in broken trees and unbroken ashfall. I was done; I turned around.

I returned to that same stretch of trail a couple of years later, and by then nature was mending. The wind in the trees created a familiar rushing sound; no more creaking. Cicadas chirped and scattered underfoot. Orange and purple butterflies flitted from deadfall to greening bush . . . because there were greening bushes, and wildflowers to gather nectar from. Back again in 2018, seasoned by a wildfire that flashed within feet of my Wine Country home in 2017, I was relieved to see head-high brush alongside the historic track, and signs of people at work in the woods: tire tracks in the mud; deadfall cut and stacked off to the side of the trail.

Firestorms, especially in these days, have become more common and more dreadful, especially in the wildland-urban interface. But fire is a natural, critical element in Caliornia’s ecology. It’s supposed to be here. It’s something that foresters, biologists, and other wildland experts are learning to use and coming to appreciate. Back in 2013, dead wood in the Warner Valley stood in pyramidal pyres, slated for ignition as part of a controlled burn once the first snows fell. When all was said and done, the forest floor was mostly cleared of what essentially amounted to tinder, and healthier for the effort. While climate change and a culture that promoted fire suppression have exacerbated wildfire danger throughout western forests, this paradigm shift—using fire to fight fire; allowing fires to burn when they don’t threaten human life and property—may mean the Warner Valley will be spared intense firestorms like those that ravaged the forest north of Hat Mountain, the city of Paradise, and the oak woodlands of the Sonoma Valley.

When I was selecting a new hike to include in this version of the guidebook, I asked Lassen’s rangers for advice. I considered options outside the burn zone, but I was drawn to the Reading burn, where I could witness both the damage done and the recovery underway. Spending the night in the burn area was still not recommended: widowmakers. But a day hike to the Bear Lakes, where maps show the Reading Fire burned hottest, attracted me like the proverbial moth.

I walked with the words of Maya Khosla, Sonoma County’s poet laureate and a wildlife biologist who researches fire recovery, circling in my head. On a hike with her in the Nuns Fire burn scar near my home, she listened for the birds, which are among the first to recolonize woodlands after wildfire. Khosla has spent seasons in Lassen doing research post-Reading, and has documented increasing populations of the black-backed woodpecker in the park. This species, a candidate for listing as endangered, thrives in the burn in numbers she believes are greater than anywhere else in California, numbers that are “phenomenal.” They share the burn with sapsuckers, warblers, Clark’s nutcrackers, hairy woodpeckers, and more.

Khosla sees beauty in the burn, a landscape fecund, not ghostly. In her poem Rejuvenation, she writes:

They will grow with the diligence of all known colors unfurling

from the soil’s chocolatey darkness

from the trees re-greening come spring

I walked like the living, and while that first vista of devastation took my breath away, I found colors unfurling in the butterflies and wildflowers, in the tawny shades of the water, in the rim of green around the shorelines, in the softening silvers of the dead standing. I was able to do something I couldn’t have fathomed back in 2013, when the Reading Fire was new, or in 2018, when the memories of my own fire flight were still raw. I was able to sit and stay, to listen and touch, to pause and reflect. And it was lovely.